We invented the SPH / HPH  Bose A20 installation Kit and own the Patent.  We also control the patent for the Lightspeed install kit. No one else can offer you the A20 for the SPH / HPH outside of our dealer network. We offer the HPH in both Passive and with the Bose A20 Aviation Headset.

Get the A20 ANR system for a powerhouse helmet with features not found in other helmets. 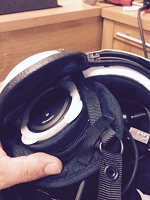 Kevlar is a plastic durable enough to resist bullets and knives-also described as "five times stronger than steel on an equal weight basis." One of its many applications entails its use as a material for lightweight helicopter helmets. Let's take a closer look at how this is done, and what makes it so durable.

Kevlar is essentially a plastic that is extremely solid. If that seems unimpressive, note that there are actually hundreds of polymerized organic plastics (joining together in long-chain molecules) and they have vastly varying properties. As a patented material, Kevlar is manufactured in two primary varieties called Kevlar 29 and Kevlar 49. It is very similar in its chemical composition to another flexible defensive agent found in helicopter helmets called Nomex. Kevlar and Nomex are examples of chemicals that in short are considered organic aromatic polyamides or aramids.

Kevlar is an ideal antiballistic substance (projectile- and knife-resistant) since it has high tensile strength. Tensile strength is basically the resistance offered by a material against a force to prevent elongation. The tightly woven fibers of strongly directed (lined-up) polymer molecules are incredibly difficult to push apart: splitting them requires an immense amount of energy and time. Most famously, it is used in the making of bulletproof vests, lightweight helicopter helmets, and other lightweight military equipment. Riding shoes, firefighting apparel, body armor, and body pads also rely on Kevlar’s unique qualities.

It is relatively light in weight for a material that is so strong. It has a very high resistance to heat (decomposes at around 450?), and unlike most other plastics, it does not melt or even expand upon heating. Additionally, Kelvar is also highly resistant to cold and does not become brittle at very low temperatures. Last but certainly not least, it is highly resistant to abrasion of any kind.

These are some of the properties of lightweight helicopter helmets for sale that are made out of Kevlar:

• It's strong but relatively light. The specific tensile strength (stretching or pulling strength) of both Kevlar 29 and Kevlar 49 is over eight times greater than that of steel wire.

• Unlike most plastics it does not melt: it's reasonably good at withstanding temperatures and decomposes only at about 450°C (850°F).

• Unlike its sister material, Nomex, Kevlar can be ignited but burning usually stops when the heat source is removed.

• Very low temperatures have no effect on Kevlar.

• Kevlar can resist attacks from many different chemicals (without long exposure)

Prior to World War I, the only helmets that were available were made out of cloth or leather as they were meant for protection from sword fights and similar weapons that were used at the time. As the war came about, the importance of head protection escalated and new materials to manufacture helmets began to come into play. Due to the advancements in weapons used, helicopter helmets were now being fabricated using steel.

As World War II began, the steel that was used for helmets was upgraded to a stronger steel that was considered more durable at the time, and therefore provided better protection to the troops. The effects of the new material used for manufacturing the pilot helmet soldiers were now using, was so evident that soldiers who previously were against wearing the helmets due to factors such as it being heavier, began wearing them.

Around the 1960’s a new non-metallic material came into the pilot helmet scene. Kevlar was invented. As mentioned before, Kevlar such a strong material that it became known as a bullet-proof material. After it began becoming a mainstream material for the military to use to produce the helmet, it was praised for producing a lightweight helicopter helmet as a result.

As weapons technology continued to advance, it was common to see Kevlar pilot helmets for sale and become a preferred choice. Since the helmets were needing to provide more advanced protection from new weapons, the lightweight helicopter helmets served to protect the troops from polarized temperatures caused by bombs, and other explosions. They also were helpful due to their lightweight, as they allowed the helicopter pilots to move more freely to get a better view while in combat. Along with that using this new material also allowed for an easier means of attaching headsets and chin straps to the available helicopter helmets for sale.

Evolution Aviation Helmets not only provides helicopter helmets for sale but also provides flight suits, an aviation headset, installation kits, and more. Contact us if you have any questions when placing your order.

ALL HELMETS FEATURED ARE MADE BY EVOLUTION HELMETS AND HAVE BEEN TESTED TO MIL-H-43925D, ANSI Z90.1B. AND DOI 4.3 HELMET STANDARDS. EVOLUTION HELMETS IS NOT ASSOCIATED WITH THE GENTEX CORPORATION OR IT'S DISTRIBUTORS!